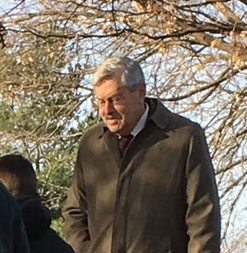 This weekend, Governor Terry Branstad said he would not rule out accepting the post of U.S. Ambassador to China, if Donald Trump asks him to serve. Today, Branstad told reporters he wants “to stay in Iowa.”

“But I’m also one that understands that if you get requested by the President-elect of the United States to consider doing something else, you should not shut the door before you even know about it,” Branstad said. “I don’t know that I’m going to be offered anything. I’m not seeking anything.”

The governor said his “interest and focus” is on Iowa, but Branstad said as a “loyal American citizen” he will consider whatever Trump might ask him to do.

“I’m a team player. I love the country and if the President of the United States were to ask me to consider something, before I even know what it is, I’m not going to rule it out,” Branstad said.

In 2009, Branstad got his wife’s blessing to return to the campaign trail and run again for governor. Branstad’s making it clear she likely has veto power on this, too.

“We’re not doing anything without her blessing, that’s for sure,” Branstad said. “You know, this will be something that would be a huge, well, that’s the thing — I don’t really want to speculate about it, but I’ll just say I love my wife. We’ve been married 44 years and I want to stay married.”

As Branstad spoke with reporters, Chris Branstad was in another room at Terrace Hill, hosting a group of turkey producers and some of her grandchildren after the official “turkey pardoning ceremony” at the governor’s mansion.