You are here: Home / Sports / Tommy Armstrong improving but Ryker Fyfe has surgery as Nebraska prepares for Iowa 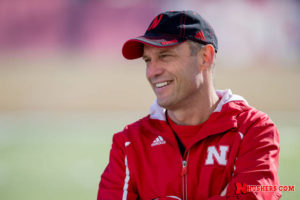 Nebraska coach Mike Riley says the Huskers have a unique situation at quarterback as they prepare for a Black Friday visit to Iowa. Riley says Tommy Armstrong is improving after missing Saturday’s game against Maryland with an injured hamstring and Ryker Fyfe is questionable after he led Nebraska to a 28-7 win over the Terrapins.

“Ryker actually broke a bone in his left wrist and had surgery to put a pin it”, said Riley. “Will he be able to play? Possibly. We will go through the same sort of scenario with him that we are going to go through with Tommy.”

Zack Darlington moved from receiver two weeks ago and was the backup against Maryland. Riley says he did not know when asked who would take the first team reps in practice Monday afternoon.

“With Ryker and Tommy we are hoping that they are physically ready to play. We will also get Zack ready and I hope that covers it.”

Nebraska takes a 9-2 record to face an Iowa team that is 7-4 after wins over Michigan and Illinois. Riley believes the fledging rivalry with the Hawkeyes will continue to grow but it is already big enough for senior safety Nate Gerry.

“For me personally the decision was here or Iowa so there is a little chip on my shoulder for that”, said Gerry. “I know a couple of kids on the team and everybody hates Iowa so we have got to come ready to play.”