You are here: Home / Fires/Accidents/Disasters / Two men who rescued neighbor from explosion to be honored at Iowa-Nebraska game 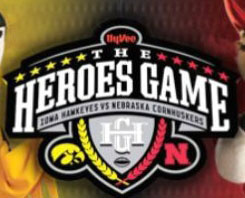 Two men from Cedar Rapids will be honored at halftime of the Iowa-Nebraska football game today in Iowa City for the courage they displayed this summer. On June 27, Brock Staley was outside when he heard something strange. “All of sudden, ‘whom,’ just heard this great big explosion,” Staley told KCRG-TV. “So, I’m thinking either a train just derailed, or something just blew (up).”

It was a neighbor’s home that exploded. Staley ran to the home with two fire extinguishers, while another neighbor – Ken Blazek – grabbed a wrench. “I realized that I could actually hear the gas, and since I just mowed (the lawn) a half hour before, I actually knew where the shut off was for the gas line,” Blazek told KCRG. “I knew I had to shut the gas line off. There was no way we could fight anything, or be first responders for anything, if we didn’t get that off.”

Diane Barnes, 64, was in the home and Staley got her out to safety. “She wanted to go back and go get her shoes and her clothes on, and I said ‘you have no time Diane. Your house is gone.’ I got her out of the house and across the street. No more than 30 seconds later and the house was fully involved,” Staley said.

For their actions, Hy-Vee and the American Red Cross will honor Staley and Blazek as “citizen heroes.” They’ll be recognized before the crowd at Kinnick Stadium, along with three residents of Omaha. Brett Bailes, Chris Holbeck and Dennis Wilson helped rescue three people who were involved in a fiery car crash back in February.