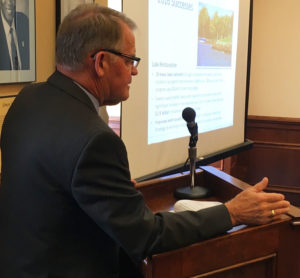 The director of the Iowa Department of Natural Resources says he’ll be forced to layoff employees and reduce services “significantly” if there’s not an increase in the fee for an Iowa fishing license.

The $19 annual fee hasn’t been changed since 2003. Those license fees go into the state’s Fish and Wildlife Trust Fund, which is used to run the state-run fish hatcheries and other related services, but the DNR’s Chuck Gipp says that budget’s becoming “a challenge.”

“There is no such thing as ‘status quo’ expenses. That continues to go up as health costs go up, as employee salaries and things like that go up,” Gipp says, “so we’re struggling when it comes to having the personnel there.”

Gipp has met with groups that represent Iowa hunters, fishing enthusiasts and others to discuss the situation.

“It isn’t grandma down the street that doesn’t hunt and fish that’s going to be impacted by revenue increases,” Gipp says. “It’s going to be the actual person that purchased the license that is getting the benefit of the fish hatcheries.”

Gipp’s department operates seven fish “hatcheries” in Iowa that raise 150 million fish each year, for stocking Iowa lakes and rivers. The Fairport Fish Hatchery on the Mississippi River near Muscatine is nearly 100 years old and “should be closed down,” according to Gipp.

“The newest facility we have is a fish hatchery at Rathbun,” Gipp says. “But that’s 25 years old and the liners of those fish ponds that grow the fish are now 25 years old and need replacements, so you’re looking at $1 million or more just to replace that type of facility.”

Gipp made his comments today during a budget presentation in the governor’s office. Governor Terry Branstad told reporters afterward that he’s “neutral” on the idea of raising the fishing license fee.

“The fishermen, if it’s something they really want, then I think they’re going to have to visit with their legislators about it,” Branstad says. “I’m not advocating for it. I’m not opposing it.”

Nearly 400,000 people purchased an Iowa fishing license this past year. State officials say while there’s been a decrease in the number of hunters, the number of people who fish in Iowa has held steady.