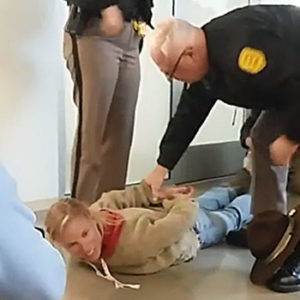 Two people protesting the Dakota Access pipeline were arrested at the Iowa Utilities Board office Wednesday after refusing to leave the building.

Jessica Reznicek and Travis O’Brennan demanded to see Iowa Utilities Board chair Geri Huser. A video released by Reznicek’s supporters shows them standing and singing in the hallway of the IUB building until state troopers told them they were being disruptive and had to leave.

Reznicek then sat in front of the door to a conference room and refused to leave. “We are the public and I think people all have forgotten that we are the bosses, we are the voices of Iowa. And it’s time that Geri Huser stop hiding in her office and come down and talk to her bosses,” Reznicek said.

A trooper then told her she could not stay. “You will be arrested for criminal trespass,” the trooper said. “I understand that. I think that that is unfortunate because I am the public and I think that we should have an open dialogue with our public officials,” Reznicek. Members of the group that call themselves the Water Protectors started signing again as Reznicek was arrested.

Reznicek then said,”This is what it looks like when a public Iowan wants to talk with her public official. This is what a democracy looks like.” Reznicek had been fasting for the last ten days outside the IUB building in protest of the board’s approval of the construction of the pipeline and says she will continue the fast. The group says the oil pipeline will endanger the drinking water of millions of people.

A spokesman for the Iowa Utilities Board says board staff met with one of the protestors Monday morning and provided information to his questions. They also met with a group of protestors Wednesday morning as well and received their questions and noted that they would provide a response by the close of buseinss. The statement says “Public safety officials have been in regular contact with the protestors. The Board received comments from the protestors as well as from other individuals who have contacted the Board on their behalf regarding the construction of the Dakota Access pipeline in Iowa. The Board will continue to assist persons with requests for information regarding the pipeline and Board procedures.

The Board has a process for any landowner or other individual to file a complaint or grievance regarding the construction of the pipeline. Each of the comments received by the Board is reviewed and if it appears the person filing the comments wants to initiate the Board’s complaint process then that process begins.”

The statement also says a lawsuit over the pipeline is ongoing and they are unable to comment on the lawsuit. It says the Board “is investigating complaints regarding construction as they are filed with the board and, if any person decides to file a complaint, the board will follow the procedures required by Iowa law and board rules in addressing the issues raised in that complaint.”