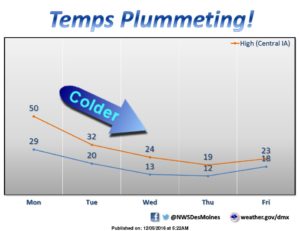 Many areas of Iowa had their first major snowfall of the season over the weekend and will soon experience another trademark of winter – bitterly cold temperatures.

While today’s highs are expected in the upper 40s west to the upper 30s east, by Thursday and Friday, highs will struggle to climb out of the teens statewide – with overnight lows in the single digits in many locations.