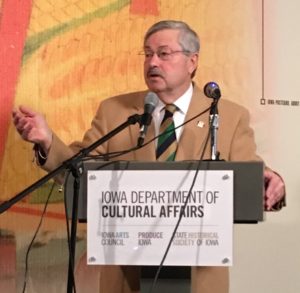 Several national media organizations, including Bloomberg and CBS News, are reporting this morning that President-elect Trump has asked Iowa’s governor to be his ambassador to China — but Branstad’s spokesman this morning those reports are “not confirmed.”

Branstad and his wife, Chris, met with Trump in New York City yesterday. Branstad emerged from the meeting saying he had “no announcement to make at this time” and “couldn’t comment” on whether Trump had offered him the ambassadorship.

Other media are citing sources inside the Trump campaign as confirming Trump did just that.

Around eight o’clock this morning, Branstad’s spokesman added the phrase “not confirmed” to his official statement about reports on the ambassadorship. Hammes continues to stress the word “premature” when referring to multiple reports that sources who are on Trump’s team confirm Trump has offered Branstad the job. It adds to the speculation an “official” announcement may be made at Trump’s rally in Des Moines tomorrow.

A Chinese government official was asked about the reports today. He called Branstad an “old friend” — a reference to Branstad’s long-standing relationship with China’s president. Reuters reports that China’s foreign ministry spokesman said the Chinese “welcome” Branstad “to play a greater role in advancing the development of China-US relations.”

On Monday, Branstad told Iowa reporters the relationship between the two countries was a lot like the Chinese symbol that represents both danger and opportunity.

Branstad is in New York City on a previously scheduled economic development trip today. He’s flying back to Iowa tomorrow and will be among those at Trump’s “Thank You Tour” rally in Des Moines Thursday evening.