You are here: Home / News / No word yet on when Branstad exits and Reynolds takes over 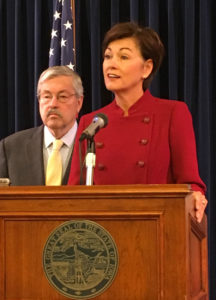 Officials say details on the transition of power at the Iowa capital “will be forthcoming,” but whenever Governor Terry Branstad leaves to become U.S. Ambassador to China, Lieutenant Governor Kim Reynolds will become the first woman to serve as Iowa’s governor.

“I am thrilled,” says Joni Ernst, the first female from Iowa to be elected to the U.S. Senate. “…I could not think of a more appropriate person to take on this responsibility. She has served Iowa in so many ways and has been such a strong and graceful leader.”

“We began corresponding when I was serving overseas with the Iowa National Guard during my deployment and she was encouraging me to run for county office and she provided a lot of wonderful guidance for me,” Ernst says. “All through my career she has been very, very helpful to me.”

“Whenever you’re around her, you know she just makes you feel happy and positive,” he says. “She’s just a great representation of what our state is.”

Kedley has lived in Osceola for five years. He’s met Reynolds personally a handful of times, most recently when Reynolds spoke at last month’s Veterans Day observance in Osceola.

Iowa Economic Development Authority director Debi Durham of Sioux City shares a Des Moines apartment with Reynolds when they are both at work in the capital city.

“As someone who knows the lieutenant governor very well, not only from working with her on so many initiatives that she has led, but obviously being a friend, I can’t be more pleased,” Durham says. “I don’t think we’ve had someone more ready to be governor from day one than Kim Reynolds.”

Durham says Reynolds “has been involved in every decision” made in the Branstad Administration over the past six years.

“When Governor Branstad recruited her to run with him, he told her from the beginning it was going to be a partnership,” Durham says, “and it truly has been.”

Durham has been in New York City this week, with Branstad, prospecting with businesses that might expand or relocate in Iowa — just as President-elect Trump’s team revealed Branstad will be the next ambassador to China. Trump hinted at the idea on November 6th during a rally in Sioux City. Durham was along for the governor’s trade mission to China in November, immediately after the election.

“We were in certain meetings with government officials and they would pivot to national issues and our governor is always quick to say: ‘Well, you really do know that’s a national issue. That’s not something the state deals with.’ And they were basically saying, ‘Yes, but we also know how influential you are and what a seasoned diplomat you are, Governor Branstad,'” Durham says. “And so I think they were also hoping this would be the president’s choice.”

“I know that he will excel and give this new role all of his full attention and provide a great line of communication between our two countries,” Ernst says.

Senator Chuck Grassley says Branstad’s “reputation as a straight shooter” will serve the U.S. well and Grassley predicts Branstad will get senate confirmation to the post of ambassador “very easily.”