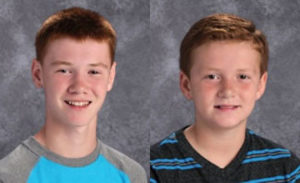 Staff and students in a western Iowa school district are grieving after two brothers, ages 14 and 11, were among three people killed in a weekend crash on Interstate 80.

Audubon Schools Superintendent Brett Gibbs says a lot of tears were shed today as kids returned to classes. “It was good getting the kids back here. I think we, as a staff, needed to see them as much as they needed to see us,” Gibbs said. “For my staff, I think it was as therapeutic as anything just having those kids back in the building and having each other to lean on.”

According to the Iowa State Patrol, the crash on Saturday happened when a semitrailer truck crossed the median and hit a minivan headed east. The van and the cab went into the ditch, but the trailer stayed on I-80 and collided with an SUV.

A man in the SUV was killed — 41-year-old Rodney Sanborn of Gretna, Nebraska was a youth hockey coach in Omaha. The Audubon students killed in the crash were in the minivan; eighth-grader Jamison Steckler and his brother, Gavin, a fifth-grader.

Gibbs said classmates of the Steckler boys will grieve in different ways. “We might have kids here who maybe were not that connected to the two Steckler boys, but this might bring up grief from another situation in their life. We’re just letting kids know however that grief comes out, it’s okay,” Gibbs said.

Audubon State Bank has a fund set up to help the Steckler family deal with the loss and expense. The boys’ parents, Toby and Pamela Steckler, and fourth-grade brother Mason were injured in the accident.