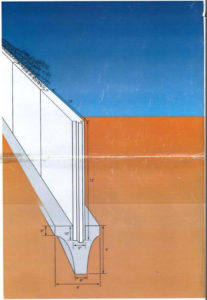 Congressman Steve King says he’s had a “one on one conversation” with President-elect Donald Trump about plans for the wall along the U.S./Mexican border. King says the conversation happened “behind the curtain” at Trump’s “Thank You” rally in Des Moines last Thursday.

“I talked him about my design and he has three architects that he wants to put me with and I’m going to find a way to sit down with them and draw up a design,” King says. “I think the function of putting the money together and getting a design approved and all, I think congress is ready to move on that as soon as we reach a consensus.”

“He essentially said to me we need to give the president-elect what he wants on border security,” King says. “And so I find myself in a pretty good spot to accomplish some pretty big things that I’ve been working on for a long time and I recognize that wouldn’t happen if we didn’t have a President-elect Trump.”

King’s vision here is not for just a single wall. It’s for three barriers: a fence, a wall and a fence. That would create a sort of “no man’s land” in between the fences and that wall, as King describes it.

The southern border is approximately 2000 miles long. King expects construction on a secure border barrier to start in the first half of 2017. And King says Trump’s decision to nominate a “border hawk” to lead the Department of Homeland Security is another significant signal the wall will be built.

King says a concrete wall, with wire fencing on either side, is the cheapest way to secure the border. Some critics say completely walling off the southern border sends the wrong signal about our democracy. Others say high tech surveillance can be used along the border. King says a “virtual wall” will not be effective. Government records indicate fencing is already in place along 700 miles of the 2000 mile border.

King made his comments during a telephone interview with Radio Iowa.