You are here: Home / Human Interest / Volunteers to put wreaths on graves at Iowa Veterans Cemetery 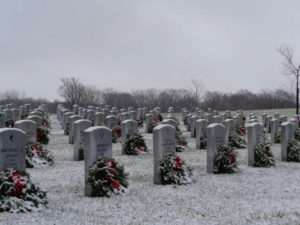 Volunteers will put wreaths on the graves at the Iowa Veterans Cemetery again this year.

Volunteers will put out some special holiday decorations this weekend on the graves of those buried in the Iowa Veterans Cemetery near Van Meter.

“Clear across the United States all the veterans cemeteries they celebrate the Wreaths Across America. Everybody puts a wreath on every gravesite,” Blum says. Blum says volunteers will lay the wreaths at the headstones on Saturday.

He says they will put out 2,600 wreaths this year. The program began in 1992 with wreaths laid on the graves at Arlington National Cemetery near Washington, D.C. and then expanded throughout the U.S. The wreaths used in Iowa and others states are paid for with donations.

“Sometimes we kind of struggle getting those donations together, but we managed to get it done this year. Each wreath costs 15 dollars a piece,” according to Blum. He says it is a touching site to see the wreaths honoring the veterans.

“It’s a beautiful thing — it really kind of shrinks your heart up when you see every one of them,” Blum says. Blum says the cemetery sees family visiting the resting places of their loved ones throughout the year.

“It don’t seem like it matters what the temperature is, cold, freezing, hot, it don’t matter,” according to Blum. The cemetery located off Interstate 80 in Dallas County was dedicated in July of 2008. Blum says they are taking donations to help pay for the wreaths for next year.

You can go to the Wreaths Across America website and then click on the tab to indicate your donation is for the Iowa Veterans Cemetery.