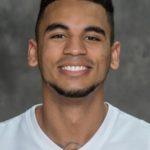 Iowa State senior Naz Mitrou-Long says he would never have stayed at Iowa State had it not been for the effort of Drake coach Jeff Rutter. It was Rutter, then an assistant under Fred Hoiberg, who took Mitrou-Long under his wing during a freshman season that saw him appear in only 18 games.

They will be on opposite sides when the Cyclones play the Bulldogs in the Hy-Vee Classic in Des Moines.

“Guys like him is the reason I was able to push through adversity and be here as a senior at Iowa State”, said Mitrou-Long. “It ultimately prepared me for situations like right now when you are going through some adversity and you need to find ways to overcome and be better down the line. I thank guys like coach Rutter for that.”

Rutter says even though he is a few years removed from the Iowa State program he remains a Mitrou-Long fan.

“I’m incredibly proud of Naz”, said Rutter. “He is an awesome person with high character and I love his work ethic. I wish him nothing but the best.”

Drake is 1-8 on the season and this will be Rutter’s second game as head coach since taking over for Ray Giacoletti. His chore this week has been to find a way to defend Mitrou-Long and a Cyclone team that averages more than 82 points per game.

He has this answer to the question of how to do that: “Put both hands together and pray.”