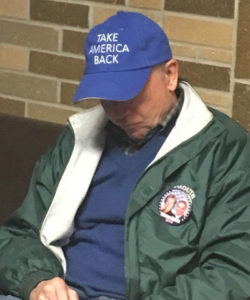 Democratic activist Tim Urban made this hat after the election.

The Iowa Democratic Party’s leadership is authorizing a “deep dive” to figure out why Democrats had such a “devastating” 2016.

Congressman Dave Loebsack of Iowa City — the only Democrat in Iowa’s congressional delegation — is helping to raise the money for the research.

“A project designed to more systematically look at what we did right and what we did wrong,” Loebsack said Saturday.

Loebsack called it the “Building Blocks” project. It will include focus groups and a “listening tour” around the state. Results will be published in April.

“We do have to pick ourselves up,” Loebsack said. “We have to get up off the mat, folks. There’s no way around it.”

According to Loebsack, Democrats “have an opportunity in 2018” if the party goes to where people “live, work and play” and have a “two-way conversation” with Iowans.

Loeback made his comments Saturday during the Iowa Democratic Party’s State Central Committee meeting. Before Loebsack’s appearance, the eight people vying to be the Iowa Democratic Party’s next chairperson were each given 15 minutes on stage to speak and answer questions from the party’s governing board. Most were asked about inside-the-party hierarchy, specifically if they’d retain the practice of electing second and third vice chairs. Many were asked what ideas rivals have advanced that they’d embrace. One prospect was asked if he supports the pipeline protesters in North Dakota — and he does.

As the last prospective party leader stood on stage, State Central Committee member Eleanore Taft of Iowa City brought up the elephant in the room.

“We seem to be losing the messaging battle to the Republicans among rural voters and working class voters, ” she said, “even though our platform’s more supportive of workers’ rights and family farms than the Republican Platform.”

Kurt Meyer, the chairman of Mitchell County Democrats, is among the people vying to be the next state party chairman. Meyer said Saturday that after “devastating” losses in 2014 and 2016, particularly in the state’s rural areas, it’s time for Iowa Democrats to develop a new agenda.

“We need a road map. We don’t currently have one,” Meyer said. “…We must craft a series of simple, forward-looking messages so that can be infused in all of our party’s programs and activities.”

“Des Moines County used to be union blue,” she said. “It is now union red.”

“I think we need to make sure that our next chair has a strong organizing background,” Lawton said, “we need somebody that has that organizer mentality.”

Derek Eaton of West Des Moines was a staffer on both of Barack Obama’s presidential campaigns here in Iowa. He said Democrats “have forgotten how to communicate” what the party stands for.

“I think one of the silver linings to come out of the disastrous election results that we had is that we finally, as a party, get to have a conversation about some tough issues,” Eaton said.

Julie Stauch of West Des Moines has worked on several campaigns here and elsewhere and currently is a “change management” consultant. Stauch argued Democrats need to find a new way to explain the party’s “identity” to voters.

“I don’t think they’re listening to us,” Stauch said, “and I think we really have to address that across the state.”

Kim Weaver of Sheldon is the Democrat who lost to Republican Congressman Steve King last month and the final candidate for party chair to speak Saturday. She argued Democrats need to run a candidate in every district — even areas like the fourth congressional district where Republicans hold a sizable voter registration edge.

“When I talked to Republicans who are like minded…I ask them: Why are you a Republican?’ They said: ‘I never knew any Democrats,'” Weaver said. “There were never any Democrats on the ballot.”

A couple of the aspiring party leaders complained about the way Hillary Clinton campaigned. Bob Krause of Des Moines, a losing primary candidate for the U.S. Senate in 2010 and 2016, cited a different culprit.

“We need to chop off the Green Party at its roots, quite frankly, because that is what beat us this last time,” Krause said.

Senate Democratic Leader Mike Gronstal of Council Bluffs lost his bid for reelection last month. He’s seeking the job of party chairman, too, but had another committment Saturday and sent a video message. Ingrid Olson of Council Bluffs, one of the plaintiffs in the lawsuit that wound up legalizing same-sex marriage in Iowa, spoke with party leaders on Gronstal’s behalf. She praised him for blocking Republican attempts to ban same-sex marriage in Iowa.