You are here: Home / Agriculture / ISU study finds wind turbines have some impact on crop fields 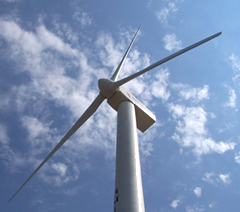 The impact of wind turbines on the state’s energy production is well documented, and now an Iowa State University study is trying to determine the impact they may have on Iowa’s crops.

ISU Distinguished Professor of agronomy, Gene Takle set out to find out if the relatively new giant rotating blades made an impact on a variety of conditions in nearby farm fields.

“Differences in micrometeorlogical conditions, differences in temperature, wind speed, wind direction humidity, carbon dioxide levels — these are some of the things that we measure up wind and down wind of turbines,” Takle explains. ” And the simple answer is yes, we can measure some differences.”

While the early research shows some changes, Takle says it’s only a small part of the research right now. “The more complicated question as to whether these have an impact on biomass production, plant size, plant yield, those are more difficult and we haven’t found anything out about those yet,” Takle says.

He says they set up a tower to measure the changes in the air over the fields. “We found that in general the landscape downwind of the turbines is slightly warmer at night and slightly cooler during the day. The amount of that is maybe a one-degree warming at night, and maybe a half-degree celsius cooling during the day — so it isn’t a large effect,” according to Takle.

One result of the changes could be less dew forming on the plants. “Which would be generally a good thing because dew promotes growth of fungus and mold and some pathogens that crops are generally affected by,” Takle says. He says they found the turbines slowed the wind over the fields.

“And this in meteorological terms that leads to a surface convergence. And that means that by laws of physics that there must be an upward motion over the windfarm,” Takle says. “..and it could have significance in that it could affect fog and cloudiness or rainfall if it is on a large enough scale.” The research was done behind a couple of rows of turbines.

“We have not gone to look at the regional scale say of 150 or 200 turbines, the impact that might have,” Takle says. “But that is an very interesting question and one that we are pursuing, because it could have some significance.”

He says it’s going to be much harder to find those answers because of all the other factors at play in a field — such as variations in soil quality or precipitation. It was announced earlier this year that from July of 2015 to July of 2016, 35.8 percent of Iowa’s electricity was generated by wind.