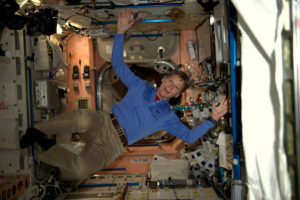 Iowa astronaut Peggy Whitson is on her third long-duration mission onboard the International Space Station and it’ll be her second Christmas in orbit.

In an interview with Radio Iowa from the station,  the Beaconsfield native says the six-member crew is planning for a traditional American holiday meal on Sunday that will include turkey, mashed potatoes, green beans, fruit salad and cornbread stuffing.

“The one other special thing that we have is, we brought up some frosting and we’re going to try to make some Christmas cookies. We have little cookies in packages and we’re going to try to decorate them,” Whitson says. “I think we should have a contest but the guys don’t seem too game on the contest idea.” The astronauts’ Christmas meal is still dehydrated and sealed in clear plastic bags, but Whitson assures it’ll be a tasty holiday treat. There is a small, artificial Christmas tree aboard the space station and Whitson says they will be exchanging gifts.

“Actually, we’ve got a few surprises planned for each other. We don’t yet know what they are,” Whitson says. “I had some stuff I brought up with me in my crew preference bag so I’m looking forward to giving some gifts on Christmas.”

One of several additions to the station since Whitson’s previous missions in 2002 and 2008 is the cupola, a large domed viewing port that provides a stunning view of the planet below. Floating on the football field-sized facility and being able to gaze down at the oceans, clouds and continents rushing past, Whitson says it brings new meaning to the phrase “Peace on Earth.”

“I think the perspective of our planet here is very special and it does provide you with the sense that there are no boundaries, that we’re a planet, we are a people,” Whitson says. “It reinforces the fact that we should be together and at peace.”

While it’s a tradition for many of us to pop open a bottle of champagne on New Year’s Eve, that’s not an option in the weightless environment of the space station. Still, Whitson says they will celebrate on December 31st.

“No champagne corks. I don’t know if we’ll have any New Year’s resolutions or not, we might,” Whitson says, laughing. “I’m not sure whether people are going to be worried about gaining weight or losing weight.”

Whitson arrived on the station on November 17th via a Russian rocket and is scheduled to remain aloft there through May. In February, she’ll celebrate her 57th birthday and is already the oldest woman ever in space. Among her many accomplishments, Whitson will be the first woman to command the station twice. She’ll take command likely in February with the next planned crew rotation.