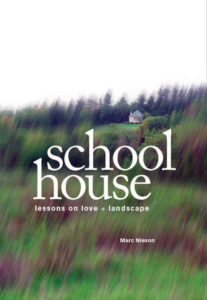 An author who grew up in the noisy New York City borough of Brooklyn says he found his writing voice by coming to the quiet woods of rural eastern Iowa.

Marc Nieson calls his memoir, “Schoolhouse,” a modern-day “Walden,” but with a love story. In the early 1990s, Nieson attended the Iowa Writers’ Workshopas as he was “on the lam” from a failing relationship and took up residence in an old schoolhouse some 15 miles from Iowa City.

“I ended up finding myself there,” Nieson says. “It was really the woodlands and the pasture and the fields of corn and soybeans that somehow stabilized me and gave me a sense of roots that I’d never had before.” The full title of the book is: “Schoolhouse, Lessons on Love and Landscape.”

The book is about nature and -human- nature, he says. The nature part is the focus on his daily “woods walks” on the 500-acre plot of forestland that surrounded the Johnson County schoolhouse.

“The human nature was just really starting to learn about myself and learn about why I had difficulties creating a lasting relationship with someone and why I was on the run,” Nieson says, “and why I was hiding out ultimately in a little schoolhouse on the top of a hill in what, for me, was not just the middle of the country but the middle of nowhere.”

Nieson is 56 and while he says the word “memoir” may have once conjured an image of an octogenarian, that’s no longer the case.

“There’s all ages of people writing memoirs these days and the period I’m writing about was when I was even younger, I was around 32 or so,” Nieson says. “It’s just a question of whether you have a piece of a story or a swath of your life that, hopefully, has something to say to other people and has some kind of communal exchange that can happen.”

The book is being published by North Liberty-based Ice Cube Press. Each chapter is named for a subject in school, like Geography, History and Social Studies. He notes: “In school they give you the lessons before the test, in life, it’s the other way around.”

Nieson is on the faculty at Chatham University in Pittsburgh.