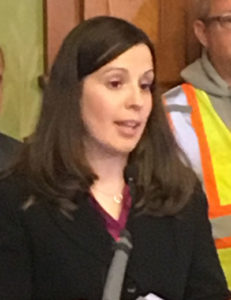 “Politicians who make our unions and our professions targets for political attacks and want to cut budgets on our backs…do so at the peril of the safety and well-being of our citizens of the state,” Katie McMahon, a kindergarten teacher from Cedar Rapids who is a member of the Iowa State Education Association.

Adam Choat of Altoona is a policeman and a member of the Teamsters Union. He worries lawmakers will no longer allow contract negotiations to cover things like whether the city or the policeman pays for on-going training safety equipment like bullet-proof vests.

“Eroding our voices on the job and cutting the profession will have a drain for the Iowa police officers,” Choat said, “just like it has in other states around us that chose to cut the voice that the police officers have in their profession.” 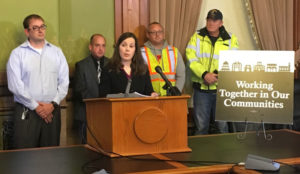 Sean Passick, a member of the American Federation of State, County and Municipal Employees union, works for the DOT and he drives a snow plow this time of year.

“Before doing this job, I took for granted how the roads I traveled every day got cleared in the harsh Iowa winters and how transportation infrastructure remains safe for me and my family,” Passick said. “As we head into the legislative session next week, please remember who the AFSCME members are who work on your behalf to make Iowa happen.”

Governor Branstad has proposed taking health care off the list of topics covered in negotiations with the unions that represent state workers. Branstad suggests it would be cheaper to have one massive agreement on health care coverage for all bargaining units in Iowa. That means it would cover city, county and school districts as well as state government.

Iowa’s current law outlining union rights for public sector workers was approved in 1974 by Republican Governor Robert Ray. It set up the system for contract negotiations and, in return, union workers at all levels of government — including teachers, do not go on strike.