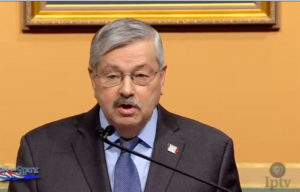 Legislators acknowledged the historic nature of Governor Terry Branstad’s final “Condition of the State” message, but partisan battle lines are beginning to form on some issues.

House Speaker Linda Upmeyer, a Republican from Clear Lake, was sitting on the podium behind Branstad as he delivered the speech.

“Governor Branstad surveyed the room like he’s never surveyed it before and it was fun to watch him just take it all in,” Upmeyer said. “You could see he recognized that this was going to be the last time he got to do this.”

Senate President Jack Whitver, a Republican from Ankeny, was the legislator who introduced Branstad to the crowd.

“It was really historic to sit back there and watch the governor give his final ‘Condition of the State’ address,” Whitver said, “and I just tried to sit back and recognize that history was being made.”

“I liked his ideas to create a smaller, smarter government,” Whitver said. “I think the Republican legislature in session here wants to make government as efficient as possible and we’re going to continue to work with him on those ideas.”

Branstad’s call to “defund” Planned Parenthood gets a thumbs down from Democrats like House Minority Leader Mark Smith of Marshalltown. Smith’s also opposed to Branstad’s proposal to no longer allow health care coverage to be part of union contarct negotiations and, instead, create some sort of statewide contract for health care coverage for union employees at all levels of government.

“There are a lot of problems with that,” Smith said. “…You hear over and over again legislators say they’re for local control, but this is an issue where they’re not taking into consideration what might be best for those local communities.”

“He’s making major, mid-year budget cuts and he did not have the decency to tell us in the speech what those are,” Hogg said, “so it was not transparent with the people of Iowa.”

“He said we’ve got smaller government. He says we’ve got a strong economy, so why do we have this $113 million budget hole?” Hogg asked. “The reason is because the economy is not performing the way Governor Branstad thinks it is…We are falling behind other states.”

But Hogg said there are some things Democrats saw in Branstad’s proposals they can support, like efforts to toughen traffic laws to address a spike in traffic fatalities.