You are here: Home / Fires/Accidents/Disasters / Name of man who died in Iowa City fire released 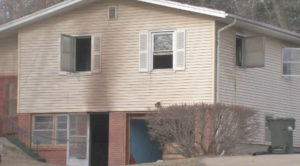 One person died in a fire in this Cedar Rapids home. (KCRG TV Photo)

Fire officials have identified a man who died in a weekend house fire in Iowa City.

Seventy-two-year-old Richard Thomson died in the fire, which started early Sunday morning in a home east of downtown Iowa City at 1516 Rochester Avenue.

Another person, who’s name has not been released, escaped the fire through a second-story window. The cause of the fire has not been determined, but investigators believe it started in the basement.