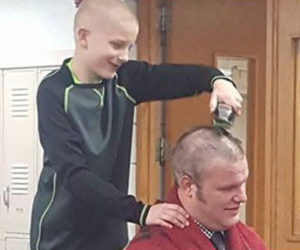 The principal at Pekin Middle School found a unique way to support a student who was teased by students.

Student Jackson Johnston shaved his head to honor his grandfather, but didn’t get the support he expected when he went to school.

“Right off the bat I got rude comments like ‘okay baldy’, ‘oh,you look like you have cancer,’ stuff like that,” Johnston says. Johnston says his classmates didn’t understand why he shaved his head.

“My grandpa is going through chemotherapy because he has a very rare form of cancer,” Johnston says. “And I’ve been close to my grandpa ever since I was a little kid. We’ve done everything together.” Pekin Principal Tim Hadley learned about the issue with the 6th grader.

He says Jackson’s mom called and said he had been excited, but things turned disappointing after the comments from his classmates. “She just basically stated that it was probably one of the worst days that he had.” Hadley decided to turn the issue into something positive.

He says he thought about it and could have disciplined the kids, but decided it was better to use it as an opportunity in the correct response and how to support others. “I’m a big believer in you can talk, but it’s better when you walk,” Hadley says. So, he allowed the 11-year-old Johnston to shave his head.

Hadley says he personally knows how Johnston felt. He says cancer affects everyone and in his case his mother battled cancer when he was in high school and he lost a grandfather to cancer. “So it is something that was near and dear to me,” Hadley says.

Hadley says his haircut got the response he wanted from students, but it has gone beyond that to people in the community who also responded with their support and praise for the way he handled the situation. He says he hopes everyone will think before they make comments to someone and ask if the comment will build them up or tear them down.