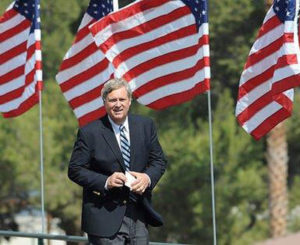 Vilsack posted a “farewell message” on the U.S.D.A. website. Vilsack thanked the department’s 90,000 employees. Vilsack said their work “allows America to have the most productive farmers, ranchers, and producers in the world.”

Vilsack is the only member of President Obama’s cabinet who had remained in the same job for both terms. Agri-Pulse reported earlier this month that Vilsack would become the president and CEO of the U.S. Dairy Export Council.

“I want to be involved in one way, shape or form of advocating for agriculture, for rural America,” Vilsack said December 8th.

He told reporters at the time that it was hard to identify his proudest achievement as U.S. ag secretary.

“It’s just been a great run,” Vilsack said, “so I’m proud of the people at U.S.D.A. and I’m confident the career folks will team up with the political team and continue the progress.”

President-elect Trump has yet to name the leader of the political team that will take over at the U.S.D.A. Vilsack’s departure highlights the lone opening in Trump’s cabinet. Trump has not yet revealed who he will nominate to be the next U.S. Ag Secretary.