You are here: Home / News / January the wettest since 1996, but less overall snow 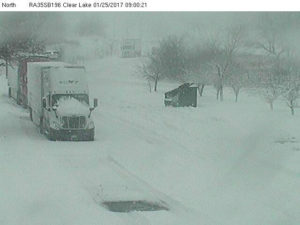 January overall saw few snowstorms like this one on the 25th.

Umbrellas got more use than shovels or snowblowers in January across Iowa. State climatologist Harry Hillaker saysthe average snowfall for the month was just a little more than half the normal amount we get for the first month of the year.

“Very little snow except — one big except in this case– the big storm that we had the 24th and 25th across northern Iowa. But other than that one big event,very little snow. Only averaging about a half inch of snow outside that one single storm,” Hillaker says.

The statewide snow total for the month was 4.5. There wasn’t much snow, but there was a lot of precipitation in other forms.

“Overall precipitation averaged 1.64 inches — which is not quite double the usual amount for January,” according to Hillaker. “But it would be our wettest January since 1996, so you’d have to go back 21 years to find a wetter beginning to the year than this year.” And when it rained it poured.

“We had several big rain events. On the 10th, rain over just about all of the state and then an ice storm on the 15th and 16th across much of Iowa as well. And we had fairly unseasonably heavy precipitation with both of those events,” Hillaker says. Warmer temperatures were behind the abundance of rain and lack of snow in January.

“If you average out the whole month together statewide — about four-and-a-half degrees warmer than a typical January. Averaging about 24 (degrees), 4.6 degrees above normal,” Hillaker says. “It would be our warmest January in five years, going back to 2012,” Hillaker explains. There were a few days of sub-zero temperatures in the first half of the month, but then we enjoyed warm days to finish out the month.

“Didn’t’ have any temperatures zero degrees or lower the second half of the month. Nothing after the 15th,” he says. “So, a very mild end of the month and the next to last day on the 30th, down in Shenandoah it got all the way up to 58 degrees.”

The warmer weather in January continues the trend from 2016 which ended up being the fifth warmest year on record.