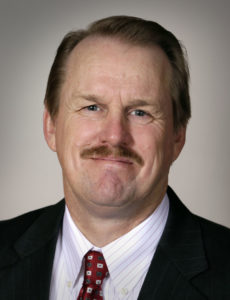 This morning, Republican legislators have unveiled the sweeping changes they plan to make in Iowa’s collective bargaining law.

Union members are streaming into the statehouse for a midday protest. Representative Dave Deyoe, a Republican from Nevada, said the scales in contract negotiations have been tipped toward public sector unions for decades and this will change that.

“If it was union busting, what we would have done was rip Chapter 20 right out of the Code Book,” Deyoe told reporters. “…We felt like this was a deliberative approach and we wanted to look at some changes, but at the same time allow unions to have some of the same rights that they have now.”

Representative Todd Taylor, a Democrat from Cedar Rapids who is a member of the AFSCME union, says the GOP’s aim is union busting.

“It’s a wolf in sheep’s clothing…The Republican Party platform 2016, you open it up (and it says): ‘We call for legislation that would eliminate all public sector unions,'” Taylor told reporters. “It’s right there. That’s what their real goal is.”

Most of the GOP’s changes would not apply to state troopers, police and firefighters. Those public safety professionals will keep all their current bargaining rights. Taylor called that a “divide and conquer” approach.

The bill would allow managers to end seniority rights in the workplace. It would also change the rules for arbitration and Deyoe said that will “equalize” the power dynamic in negotiations.

Republicans in the Iowa Senate plan to advance a similar bill this week. Democrats in the senate say they have not yet seen a copy of the senate bill.

(Check back for more information on this developing story)