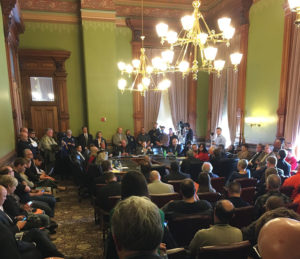 Representative Steven Holt, a Republican from Denison, opened the debate at about 3 p.m.

“The common-sense reforms in this bill will result in a state government in Iowa that is more responsive and more affordable for the people paying the bill, the taxpayers,” Holt said. “Under the current system that has not been reformed in over 40 years, the taxpayer is at a disadvantage.”

“There is no common sense in this bill,” Running-Marquardt said. “This bill isn’t about reform. This bill is about political agendas and attacking Iowa workers. It’s extreme.”

“This is how we ‘Make America Great Again’ by literally taking away the rights of 180,000 public employees in the state of Iowa,” Hunter said.

Republicans who hold a majority of seats on the committee advanced the bill tonight, making it eligible for debate in the Iowa House next week. Holt, whose wife is a teacher, said the bill is a “win for the children of Iowa” because it gets rid of the seniority system for teachers.

“These changes will allow school districts, the boards elected by the people, to reward high-performing teachers, while more quickly removing those not meeting acceptable standards,” Holt said.

There were two committee hearings at the statehouse earlier in the day. Several critics of the bill said their comments are unlikely to sway Republicans who are intent on passing the bill quickly. A public hearing will be held Monday night on the issue. It’s likely the House and Senate will vote on the bill and send it to the governor early next week.