You are here: Home / Education / Board of Regents president Rastetter will not seek another term 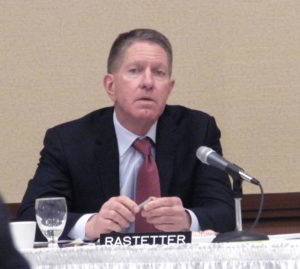 Bruce Rastetter during a Board of Regents meeting.

The president of the Iowa Board of Regents announced today he will not seek another term when his current term expires on April 30th.

Bruce Rastetter was appointed by the governor to the board that oversees the state’s three public universities in 2011 and became the president in 2013. Rastetter issued a release today that says leaving the board allows him to return to his agribusiness interests in the Midwest and in South America.

Rastetter founded the Summit Agricultural Group in 1990 and serves today as its CEO. In the news release he says he “will leave the board satisfied that we made significant strides improving the value of higher education in Iowa.”

Rastetter cites tuition freezes for two-and-a-half years at Iowa State University, the University of Iowa and the University of Northern Iowa as one of his accomplishments. He also says record student enrollment, growth in private donations and several building projects are among the successes.

Rastetter had indicated late last month that he was looking at his future on the board and balancing his time there with the needs of his business.