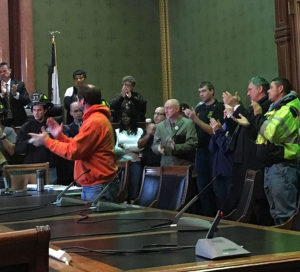 Union members clapping during a hearing on the collective bargaining law.

Republicans in the state legislature who’re poised to change Iowa’s collective bargaining law may get an earful at weekend forums in their districts.

The leaders of Iowa’s public sector unions have said they do not plan to mimic what happened in Wisconsin when lawmakers in that state took steps to retract union bargaining rights.

“I was in Wisconsin. I participated in those large rallies. That didn’t work very well,” AFSCME Council 61 president Danny Homan said. “We don’t have the time if we wanted to because I believe this bill’s signed (into law) Monday or Tuesday of next week.”

“They are actually working their tail off to try to do the best they can every day, taking care of people across this state,” Wawro said.

But Wawro is encouraging members of the teachers’ union to go to forums Saturday, to speak with their local legislators.

“They need to go talk to the people maybe they even voted for and say, ‘Hey, this isn’t what we elected you to do,'” Wawro said.

There will be a public hearing at the statehouse Monday night. Bill backers say it’s likely the labor bill will pass the Republican-led House and Senate early next week.