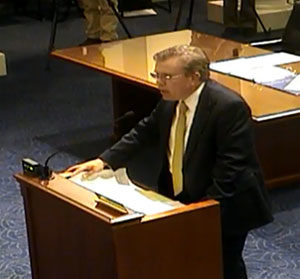 The Iowa Supreme Court heard arguments Monday in the appeal of Eddie Tipton —the man convicted of manipulating a Hot Lotto drawing so he could win a multi-million dollar prize.

Tipton argues there is not enough evidence to show he committed the crime, and the statute of limitations expired before charges were brought against him.  Tipton was the former head of security for the Multi State Lottery Association, which ran the drawings for the Hot Lotto games.

Stowers said the video doesn’t provide positive proof that Tipton bought the ticket. “On the question on whether or not some people believe that’s his voice — yeah we lose on that — but that’s not the crux of appeal. The only point I would make is, when you actually look at what some of these witnesses said, there’s nine words spoken on this video,” Stowers said.

Appel said Stowers has a point, but the video is part of a string of evidence. “The coincidences just add up beyond belief. Eddie Tipton who is a security expert goes into the Quick Trip right across the street and just happens to buy two tickets and by golly wins $16.5 million and away we go,” Appel said. “And it seems to me on your substantial evidence argument the key is the identification. What are the odds of someone walking into a Quick Trip and hitting 16.5 in the Hot Lotto?”

Stowers said there’s a year gap between the time when Tipton allegedly bought the ticket and when a lawyer tried to cash it in. “In our view there’s no evidence he attempted redeem the ticket whatsoever or had anything to do with it being claimed,” according to Stowers. 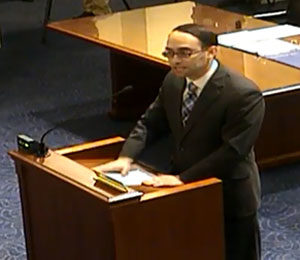 The statute of limitations issue was also addressed during the oral arguments as justices questioned prosecution attorney Louis Sloven on why investigators waited three years to release the video tape.

Sloven said they were trying to run down a lot of leads and didn’t want to reveal information in the video until they absolutely had to.

“Even though the time to actually get the prize had elapsed, people were still calling in with their claims asserting that they had purchased the ticket. Even though they had nothing to gain, it didn’t stop people from doing that,” Sloven explains. “So keeping that video secret was a very important part of weeding out those claims efficiently.” And Sloven said they didn’t know a fraud in the drawing had occurred until people identified Tipton as the man buying the ticket and they connected him to the drawing.

Tipton’s lawyer, Stowers, told the justices the claim that Tipton had manipulated the computer that picked the numbers is just speculation.

“We can talk about all these other issues, but at bottom we have no evidence of the theory that they allege,” Stowers said, “and their theory was that Tipton went into the room and stuck this little thumb drive into the computer when it was unlocked when other people were standing around and watching. Did this all into a two minute window that was not clearly videotaped.”

Stowers said in his wrap up that the evidence the prosecutors have against Tipton is all circumstantial and would be the same as charging someone with arson because they had bought gas. “You apparently filled your gas can up with some gas. You know how to use matches, and guess what, yesterday your house burned down. And you got insurance on your house,” Stowers said.  “So you’ve got motive, you’ve got opportunity, you’ve got knowledge.  They don’t know how the fire started, but the house burned down and now you are charged with arson. And that’s their evidence. Are you guilty of arson based on that? And that’s really what the state’s case was here.”

The Chief Justice said it should take around 90 days for them to make a decision on the case.