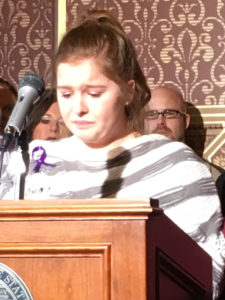 Student Holly Baird pauses to compose herself while talking about deaths of her friends.

Two parents, a spouse and the classmates of five Iowans who’ve died in accidents caused by a texting driver are at the statehouse today with an emotional message for legislators: pass a law barring the use of an electronic device while driving.

Linn-Mar High School junior Holly Baird and seven of her friends say their goal is to spread the word about the dangers of texting, Snapchatting or emailing while driving.

“We are here because our friends Selena and Bella were killed in a tragic accident that was caused by reckless driving, but specifically texting and driving,” Baird said during a statehouse news conference, choking back tears. “…We fully support Senate (Study Bill) 1079 stating that a person shall not use an electronic communication device while driving a motor vehicle.” 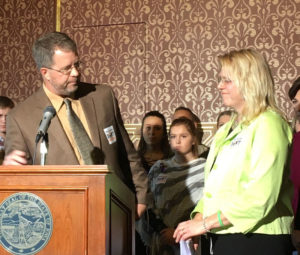 Nearly 19 months ago, Grace Harken of Riceville was struck from behind and killed while riding her bike along a north central Iowa highway.

“The last thing I’d ever thought would have happened in my life was to find her on the side of the road like I did on July 29, 2015….If she would have been asked by God himself to say, ‘Some will have to be lost in order to save others,’ she would have said: ‘I’ll go,'” Darrel Harken of Riceville said.

This spring Harken will put a white “ghost bike” at the spot along Highway 9, near Osage, where their daughter died.

“One thing that we’re also adding this spring is a sign that says: ‘GRACE: Give Riders A Chance Everytime,'” Christine Harken, Grace’s mother, said. “Grace didn’t have a chance. When she was struck on her bike from behind, she didn’t see it coming, but neither did the driver of the car.” 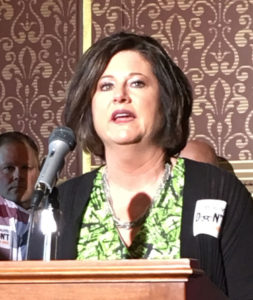 Kristi Castenson’s husband and mother-in-law were killed on May 8th of 2015 by a 21-year-old driver who ran a stop sign on a highway near Dayton while he was texting.

“Laws have to change,” said Castenson, who is from Harcourt. “..This individual received probation for four years for taking two lives. He was charged with two counts of vehicular homicide.”

Governor Branstad is asking lawmakers to reclassify the act of vehicular homicide while distracted by a phone as reckless driving. Branstad also supports the move to ban the use of smart phones while driving, unless the device is in voice-activated or hands-free mode.

“Each of the speakers had a unique perspective on why this is so important,” Branstad told reporters.

The “Stay Alive, Don’t Phone and Drive” coalition is having its “day on the hill” today to lobby legislators on these issues.