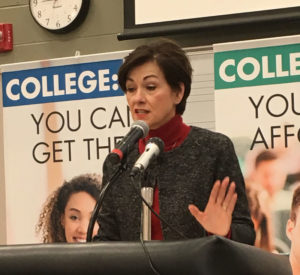 Iowa Lieutenant Governor Kim Reynolds attended the first ever “Girls Who Code” summit this weekend in at the Facebook headquarters in California. Reynolds says the purpose of the conference was to share ideas on closing the gender gap in technology fields.

She says it was an opportunity to learn form other governors and raise the awareness of the importance of computer science — especially on young girls. The governors of Rhode Island and Oklahoma were also there. Reynolds says she talked with them about legislation working its way through the House and Senate in Iowa that will help.

“It’ll encourage school districts to bring in high-quality computer science programs in elementary, middle school and high school. And it will provide — hopefully if we can get the bill passed — professional development for educators so that they have the tools to professionally teach computer science,” Reynolds says. The creator of the “Girls Who Code” organization, Reshma Saujani, was asked why more girls don’t get into computer science.

“I think a lot of it has to do with culture. We always say ‘girls can’t be what you cannot see.’ And when you turn on the television you don’t see engineers who are women, or software programmers who are women, or folks working in technology who are women. And I think little girls then think that this field is not for me,” Suajani says. Reynolds says it’s important to Iowa and the country to get more highly-skilled workers. She says it can be a great career for women.