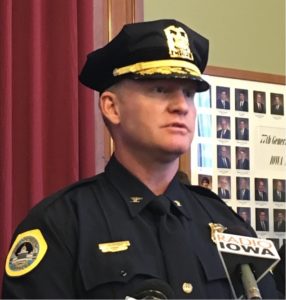 The Republican mayor of a Des Moines suburb and two central Iowa police chiefs are urging GOP legislators to table major portions of a gun bill under consideration in the Iowa House.  The bill would allow guns in public buildings, like the capitol, and on college campuses.

“The officers will have to deal with these issues at a much higher rate and then as a bonus they’ll get to sit back and face the criticism about how and why and what they did,” Wingert says.

Supporters of the bill say if a “bad guy” starts shooting in a public place, they’ll be stopped sooner if a “good guy” bystander is armed. Pleasant Hill Police Al Pizzano disagrees.

“In an environment like that as police are responding to possible active shooter incident, we don’t want people running through a campus with fire arms,” Pizzano says. “…We want to be able to clearly identify the target so we can stop the individual as quickly as possible.”

Pleasant Hill Mayor Sara Kurovski, a Republican,  has a permit to carry a concealed weapon. She’s expressing concern about the section of the bill that removes the “duty to retreat” when confronted by someone threatening your property or your life.

“Stand your ground will make it much more difficult to prosecute, especially as it relates to gang-related crimes,” Kurovski says.

Kurovski and the police chiefs say gang members will use the “stand your ground” provision to claim they were merely defending themselves in gun battles.

“Sometimes it is difficult for all of us as leaders to know where we should draw the line,” Kurovski says. “…Today, I am encouraging all legislators to draw a bold, blue line in order to assist the brave men and women who put on a uniform every day to keep our communities safe.”

Kurovski and the two police chiefs made their comments this morning during a statehouse news conference.

The wide ranging bill under consideration in the House has the support of several gun groups, plus the Iowa State Police Association and the Iowa State Sheriffs’ and Deputies’ Association are registered as “undecided” on the bill. An Iowa-based lobbyist for the National Rifle Association says Iowa’s current gun laws are too restrictive and make gun owners “second-class citizens.”