You are here: Home / Crime / Courts / Residents vow to “take back” Bridgewater from drug activity 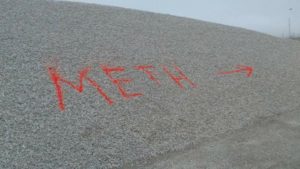 Graffiti on rock pile outside of Bridgewater, Iowa

Residents of a community in southwest Iowa are rallying around an effort to rid the town of drug dealers and users.

Doug Miller launched an initiative he’s calling “Take Back Bridgewater, Iowa” and 70 people showed up for an initial meeting Tuesday night. “We originally set up a dozen chairs and then we went to 20, then 50, then 70. We were wondering if we’d have enough. It was just an overwhelming response,” Miller said. Just under 200 people live in the Adair County town.

Miller organized the meeting after he became aware of an Adair County road rock pile with the word “Meth” spray painted on it and an arrow pointing toward Bridgewater. “As a citizen of Bridgewater who doesn’t want to see our proud community going down this path, somebody has to take a stand and somebody has to lead,” Miller said.

The drug dealer and user community in Bridgewater is apparently organized as well. According to Miller, loud train horns are occasionally heard around town and they’re being used by drug dealers and users to warn each other when police are passing through town.