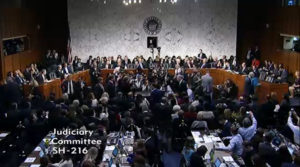 The hearing on the Supreme Court nomination of Neil Gorsuch opened this morning.

Iowa Republican Senator Chuck Grassley is the chair of the Senate Judiciary Committee which is conducting the nomination hearing. Grassley opened the hearing with a statement where he talked about the U.S. Constitution, saying its most important feature is the separation of powers.

“Under that system, except where the Constitution has already answered the question, decisions are made by elected representatives. Elected yes, but also accountable to the voters. But to endure, our system of self-government requires judges to apply the text of our laws as the people’s representatives enacted them, Grassley says. Grassley says by design judges play a critical-but limited-role. 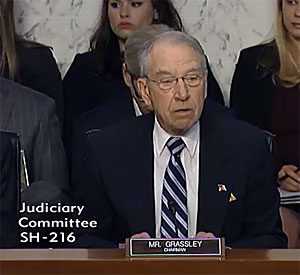 “They decide cases or controversies. But in resolving those cases, they may look only to the laws the People wrote. Judges aren’t free to rewrite statutes to get results they believe are more just,” Grassley says. He continued talking about the limited role of judges.

“Judges are not free to reorder regulations to make them more fair. For sure, judges aren’t free to ‘update’ the Constitution. That’s not their job. That power is retained by the people,” according to Grassley. Grassley wrapped up his statement by directly addressing Gorsuch.

“Judge, I look forward to hearing more about your exceptional record. And I look forward to the conversation we’ll all have about the meaning of our Constitution and the job of a Supreme Court Justice in our constitutional scheme, Grassley says. Each of the members of the judiciary committee is making opening remarks before they get to the direct questions of Gorsuch.