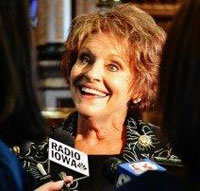 Republican leaders in the Iowa House are launching an investigation “inspired by” the case of a central Iowa teen who died last October of starvation, but House Speaker Linda Upmeyer today said they do not plan to ask direct questions that might jeopardize the criminal case against Natalie Finn’s adoptive mother and the woman’s ex-husband.

“We certainly don’t want to do anything that would prevent the law from dealing with this the way they should,” Upmeyer told reporters during her weekly statehouse news conference. “Now, I think, we are at (time) where we have a responsibility to look at the system and the process.”

The House Government Oversight Committee will conduct the investigation. Committee chairman Bobby Kaufmann, a Republican from Wilton, said the panel will look at how the Department of Human Services handles child abuse and neglect allegations and how the agency follows up after placing a child in foster homes or with adoptive parents.

“I’m not going in with a ‘gotcha’ attitude,” Kaufmann said. “I’m truly looking to understand and for us as a committee to understand how this whole thing works.”

The committee may meet into the summer and fall and could make recommendations for some sort of legislative action according to Kaufmann. The goal, he said, is to prevent tragedies like Finn’s from happening in the future.

“I don’t think it’s unusual for us to make sure that there’s not a systemic problem in any department where there’ve been resulting issues,” Kaufmann said.

A few Democrats have been pressing for an investigation of the Department of Human Services since January and accusing Governor Branstad of trying to “cover up” inadequate staffing levels in the state agency that handles reports of child abuse. Kaufmann today accused Democratic Senator Matt McCoy of politicizing the issue and walking a “thin line” that could hurt the prosecution’s case against Finn’s adoptive parents by revealing too much information to the public. Democrats on Kaufmann’s committee in the House say they’re glad Republicans are finally showing an interest in investigating the DHS.

“There’s a huge issue here and these are our kids we’re talking about here, so however it’s being investigated, it needs to be investigated,” said Representative Abby Finenauer, a Democrat from Dubuque.

The Republican leader of the Oversight Committee in the Iowa Senate this is a “delicate situation” and the Department of Human Services “has reviewed all of their staffing options…and feel comfortable with where they’re at and the training they’re doing.” It’s unclear whether Senate Republicans will join the House investigation.