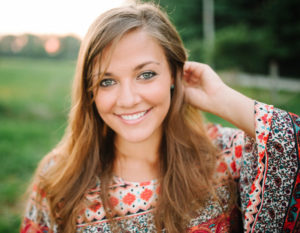 An eastern Iowa woman will be one of the star auctioneers in the upcoming season of the internationally-popular cable TV show, “Storage Wars.”

Emily Wears of Solon, grew up in an Iowa auctioneering family and was ready to step right into the role on the A&E series. She says the premise on “Storage Wars” is always the same and the pay-off is always different.

“We go to this storage unit that the owner hasn’t been paying for and we cut the lock on the door and we open the door and everybody looks in,” Wears says. “They can’t go in, they can’t touch anything, so whatever they can see from outside of the storage unit is what they’re bidding on. Then I sell it. I auctioneer the unit and the highest bidder wins it and they win every single piece of trash-treasure that’s in the unit.”

At a traditional auction, the item being sold is beside the auctioneer and it’s easy to point out its attributes. In the format of this TV show, however, Wears says it’s a bit more challenging to be the auctioneer.”You pick out the things that you can’t see that look promising,” Wears says. “If there’s some huge thing in the back that’s clearly been wrapped nicely or covered nicely, you say, ‘Hey, what’s back there? That’s gotta’ be worth something. They obviously took care of it.’ Or you say, ‘Looks like everything in here is quality items so whatever’s hiding in the back is going to be nice, too.'”

The auctioneering industry is dominated by men, often older men, so the 27-year-old Wears often surprises people when she tells them what she does for a living. On “Storage Wars,” her identity was initially kept a secret to have a more dramatic impact when it was revealed.

“That’s going to be exciting because that’s in the first episode and they don’t know that I’m the one that’s going to be calling the bids,” Wears says. “So, when I start auctioneering, everybody in the crowd, their jaws just drop because they don’t expect that to come out of me. I’m definitely not the stereotypical auctioneer that most people expect.”

Wears went to auction school at age 17, attended the University of Northern Iowa, and later transferred to the University of Wyoming to earn her degree in business. She spent seven years in Wyoming before moving back to Solon a year-and-a-half ago.

“I work fulltime with my dad in our business here, Wears Auctioneering in Solon, doing auctions,” Wears says. “When I moved back, I took over the online auction portion of our company which is all online bidding, basically kind of eBay-style. Then Dad still runs the live auctions that we do on Saturdays and I help with those on the weekends, too.”

After eight weeks of filming in Los Angeles, Wears will be featured on nine episodes of the upcoming season of “Storage Wars,” which is scheduled to premiere on A&E on April 12th.