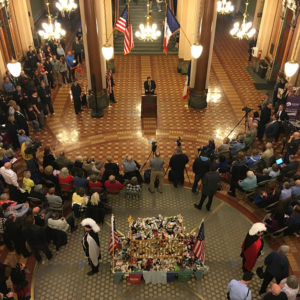 Rally against abortion in the rotunda of the Iowa State Capitol.

Advocates for a complete ban on all abortions who rallied at the statehouse today were counseled by lawmakers to be patient.

Last night, Republicans on a House committee advanced a bill that would ban nearly all abortions in Iowa after the 20th week of a pregnancy. Governor Terry Branstad told the crowd he’s been seeking abortion restrictions since he was first elected to the legislature in 1972.

“I want to thank you for your tireless work over so many years advancing the prolife movement in our state, which puts us on the verge of doing ,” Branstad said. “I know it’s not as much as everybody would like, but this is an incremental, ongoing effort to protect human life.”

Senate Majority Leader Bill Dix of Shell Rock said moving the state’ abortion ban from the 26th to the 20th week of pregnancy “protects more lives than has ever been accomplished in state history.”

“We are not going to stop,” Dix said. “We believe in what we’ve moved forward and we’re going to do everything we can each and every day to save the lives of the unborn in our state.” 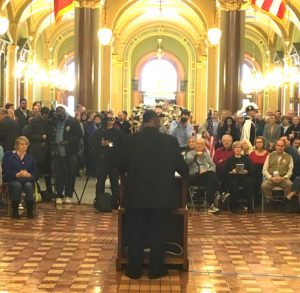 Iowa Family Leader president Bob Vander Plaats, a leading voice for Evangelical Christians in the state, makes it clear GOP legislators will be pressured to follow through on those promises.

Today’s rally was held in the rotunda of the capitol in Des Moines. Pastor Ron Woods of the Rhema Worship Center in Des Moines opened the event with prayer.

“I want the entire capitol to know that not only do we mean business, but we believe that every life matters, including the unborn child. Can you just give God the loudest, thunderous praise…because very life matters,” Woods said and the crowd stood to cheer and applaud.

Legislators, religious leaders and the state’s lieutenant governor were also featured speakers at the hour-long event.