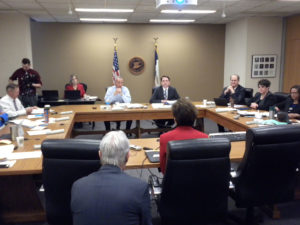 Lt. Governor Kim Reynolds visits with the Iowa Board of Education.

“This has been a very, very difficult budget this year, I think it’s going to be very hard to do this year,” Reynolds says. She says the legislature as look at a variety of issues from providing flexibility in different areas that have impact districts across the state.

The governor has already had to make a couple of cuts in the current budget and that means the establishment of an education savings fund to help families pay for private education may have to wait.

“We’re working with the Legislature, you know it’s been a tough budget year and we’re looking at a tough budget year in ’18, we start to pull out of it in ’19. So, they’re going to continue to look at those areas,” Reynolds says. ” It’s the art of what’s possible in a really tight budget.” Reynolds made those comments after a meeting Iowa Board of Education.

During that meeting, board member Diane Crookham-Johnson of Oskaloosa told Reynolds that state legislators talked with them about an emphasis on private education and she asked what kind of commitment the state should be making to public education. 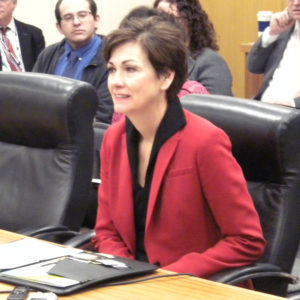 Lt. Governor Kim Reynolds at the Board of Education meeting.

“I think we are making it every single day by trying to provide educators with the tools that they need to be successful, I think we’ve done that with the TLC, by creating a system where teachers and educators can collaborate and work together,” Reynolds says. “By working on the early warning assessment that you talked about — which is again giving teachers the tools to identify where their students are at –so they can adjust the strategies and help them get to proficiency and beyond.” But Reynolds says she also supports parents having choice.

“You know, we need both. We need strong public schools, and we also shouldn’t be afraid of giving parents the opportunity to choose where they send their student,” Reynolds says. Reynolds says she’s the product of public education in Iowa, and her daughter is a teacher, so she wants public education to remain strong too.