You are here: Home / Human Interest / Iowa cartoonist and soldier from World War I remembered 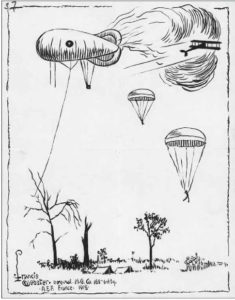 As we mark the 100th anniversary of the U.S. entering World War One, a special presentation will be held Sunday in southwest Iowa about the role many Iowans played in that “War to End All Wars.”

Author Darrek Orwig has done extensive research on Iowans like Francis Webster, a National Guardsman and war correspondent who provided many works of wartime art for Iowa newspapers.

“In addition to being a soldier in the unit’s machine gun company, he also had a journalist’s bag on,” Orwig says. “He was involved with doing political cartoons under Ding Darling while he was in college. He saw a real need to be able to communicate what was going on and he started using his skills as an illustrator to document that.”

After Webster died in the line of duty, his buddies grabbed his artwork and notes and presented them to his family, who cared for those items for 90 years. The documents recently resurfaced and were donated to the Iowa Gold Star Military Museum at Camp Dodge. One focal point of Orwig’s talk will be on this dedicated young Iowan who died in battle.

“A lot of it will be sharing the true story of Francis Webster through his artwork and some of his experiences,” Orwig says, “but I’ll also have images from the battlefields in the Ourcq River area where Company M played a very prominent role.” Orwig visited France a couple of years ago and went to the area where the battles took place in 1918. He says little has changed as far as the scenery and the wheat fields are still littered with shrapnel.

“The foxholes that Iowans had occupied are still on the treelines, there’s still a lot of shell holes and piles of bullet casings,” Orwig says. “You can definitely tell the war is still there and it’s very much in the psyche of the French people.”

Orwig’s latest book is called, “Somewhere Over There: The Letters, Diary and Artwork of a World War I Corporal.” His free talk is scheduled for Sunday at 2 P.M. at the American Legion Building in Atlantic.