You are here: Home / Health / Medicine / Report finds Iowa is the top spot for doctors to work 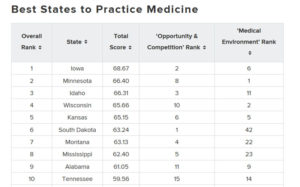 A report issued last week claims Iowa is the best state in the country to be a doctor.

“Speaking from the hospital perspective, I think our hospitals provide doctors with a great place to work,” McIntyre said. “A place where they are respected, where they have opportunities for leadership, and where health care is done in a patient-first environment.” Iowa has 118 hospitals. The WalletHub report claims physicians in this state are paid the fourth highest average wage, when adjusted for the cost of living.

“The competition for physicians is stiff throughout the nation and throughout the world,” McIntyre said. “It’s a very tough market out there, so Iowa…has its work cut out for it to attract the best physicians possible.” The report also notes Iowa has the sixth most hospitals per capita and the sixth highest insured population rate.