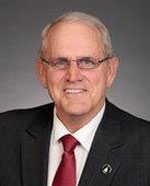 A bill that would provide money for water improvement projects seems to be treading water at the statehouse. The bill awaits a vote in the Iowa House and it was nearly defeated in a three-member Senate subcommittee yesterday.

Lawmakers are questioning whether to siphon money from other areas of state government to deal with water quality needs, including the repair and rebuilding of city sewer and drinking water systems. Senator Ken Rozenboom, a Republican farmer from Oskaloosa, voted for the plan, but he’s not convinced by critics who say the situation’s urgent.

“I don’t necessarily subscribe to the theory that the sky is falling with respect to water quality,” Rozenboom said.

Senator Rick Bertrand, a Republican from Sioux City, voted against the plan because it drains millions out of the state account that pays to repair state-owned buildings.

“The problem that I continue to have…and I don’t know why I’m on this subcommittee — is the funding source that’s associated with this,” Bertrand said.

Senator Joe Bolkcom, a Democrat from Iowa City, said he’s not a fan of the funding plan either, but he voted for the bill.

“I’m willing, with pretty significant reservations, to allow people to keep working on it,” Bolkcom said.

If Bolkcom had voted against the plan, it would have failed to clear its first test in the senate.