You are here: Home / Military / World War One exhibit opens at the State Historical Museum of Iowa 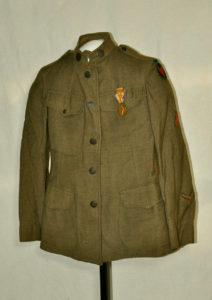 Jacket of Clarence C. Helvig of Story County who served as a medic.

The United States entered into World War One 100 years ago today and an exhibit opening at the State Historical Museum will tell the story of how the war impacted the people of our state. Spokesperson Jeff Morgan says the exhibit will have a lot of artifacts and information.

“Different uniforms that had sustained bullet damage. We are going to be learning about African-American officers who trained at Fort Des Moines. We’re going to have propaganda materials that were put out on display to help gather and garner public opinion about the war. We’re going to look at prohibition and woman’s suffrage at the time,” Morgan says.

He says the exhibits will detail how the war sparked anti-immigrant sentiments in Iowa cities and towns. “We also have an exhibit coming in from the University of Iowa called ‘German Iowa and the Global Midwest,’ and it uses photos and artifacts to explain how Germans influenced everything from politics to beer in Iowa,” according to Morgan. He says the war marked a turning point for the country and the world.

“It was really the first use of modern day warfare tactics where you had machines guns and chemical warfare was being used. It was trench warfare and you had carnage and destruction that the world had never seen before,” Morgan says, “and really ushered in a modern day era of warfare.” The exhibit also looks at how everyday life in Iowa was impacted.

WW I Victory Medal of Lieutenant James B. Morris who was trained at Fort Des Moines.

“There were a lot of sacrifices made here at home too as well as on the battlefield. People were very innovative about how they used resources,” Morgan explains. “As a matter of fact they even cornmeal sacks into dresses. We will have one of those on display — it is from the Belgium Relief Association of Iowa cornmeal. It is from the Beaver Valley Milling Company here in Des Moines,” Morgan says.

The museum opens at nine A.M. and is open until 4:30 p.m. Monday through Saturday. It is open noon until 4:30 on Sunday. For more information on the exhibits and events, go to: www.iowaculture.gov.