You are here: Home / Sports / Iowa State defensive back has eye on the future 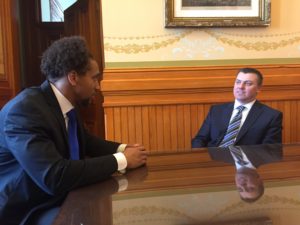 An Iowa State football player is preparing for life after football. Redshirt senior defensive back Evrett Edwards got a special pass to spend the day on the floor of the Iowa Senate. He started five games for the Cyclones last season after coming to Iowa State as a graduate transfer from Duke.

“I’m enjoying it a lot”, said Edwards. “This is an amazing opportunity.”

He was the guest of Senate President Jack Whitver of Ankeny in the Iowa Senate Tuesday. Whitver is a former wide receiver for the Cyclones.

“I was partnered with him in a mentee-mentor relationship program at Iowa State with current players and former players and he has an interest in politics,” Whitver said during welcoming remarks on Tuesday.

Edwards, a native of Texas, graduated from Duke University in three years with a degree in international comparative studies. He played two seasons for the Blue Devils and got to I-S-U with two years of eligibility remaining.

“I’m currently enrolled at Iowa State in the community and regional planning masters program.” Edwards, who speaks Spanish, French AND English, says his trip to the state capitol is helping him understand how politics actually works.

“I’ve been trying to take all this in. This seems kind of surreal. It’s a dream come true,” said Edwards. “I know most guys, most kids my age aren’t like: ‘Oh, I want to go see the Senate,’ but it’s the kind of thing I love.”

Edwards played in a dozen I-S-U games last season. He’s credited with 52 tackles for the season and an interception. He had eight solo tackles in the Baylor game.