You are here: Home / News / Congressman King: Trump’s voting base ‘starting to get uneasy’ 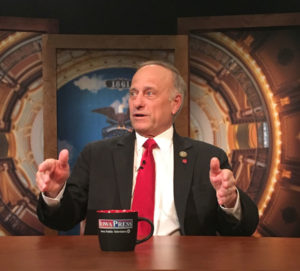 “People are policy,” King said, “so whenever I see those kind of appointments come in place, I do get concerned about it.”

King, though, said he has “some level of comfort” because of what Trump said during the campaign, plus King is a fan of Trump’s attorney general. Jeff Sessions and King were staunch opponents of immigration reform efforts during the Obama and Bush Administrations.

“But I am not at the level of being happy with so far of what Donald Trump has done (regarding immigration policy),” King said. “He’s done some good things, but DACA and DAPA still exist.”

King opposes the “Deferred Action for Childhood Arrivals” or DACA as well as DAPA, Obama’s decision to table deportation orders for the parents of American citizens.

“And I’ve told the president this: ‘Every day you don’t address this, it gets harder and harder to do,'” King said.

If Trump were to try granting legal status to people who came into the country illegally, King warns Trump’s support would slump in the countryside.

“I wouldn’t say that is the case today. His base is starting to get uneasy because they haven’t seen this movement on DACA and on DAPA…They are not quite confident yet on the wall, but the messages are clear out of the White House: ‘We’ll build the wall,'” King said. “…I look at the ‘to do’ list that comes out of the campaign promises of Donald Trump…and there are quite a few check marks behind that. There are a few to go or he will lose his base and think that’s an important message for the president to receive.”

King said he’s trying to “whip” up support among House conservatives who opposed the initial plan to “repeal and replace” ObamaCare. King made his comments this afternoon during taping of this week’s episode of “Iowa Press.” It will air Friday night at 7:30 on Iowa Public Television.