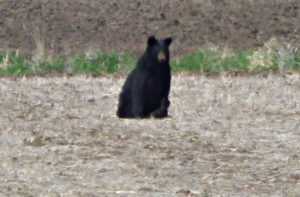 This bear had been see in northeast Iowa.

Residents of three neighboring counties in Iowa have reported bear sightings this week.

The Department of Natural Resources receives calls about bears in Iowa usually once or twice a year as they wander into the state from woods in Minnesota and Wisconsin.

Everett Manship told KCRG-TV he enjoys searching for wildlife in rural Grundy County. On Monday afternoon, he found something unexpected — a young black bear — and snapped a few pictures.

“He was a pretty good sized, he wasn’t a cub, I would say at least 250 pounds,” Manship said. DNR Biologist Tim Thompson told KCRG-TV that bear sightings in Grundy, Butler and Tama counties in recent days likely involve the same animal. The bear’s family probably kicked him out and he’s now looking for fellow bears and food.

“That female isn’t going to want that younger, but adult-size bear when she has new cubs and it sort of gets kicked out. It’s just looking for its new territory and trying to establish itself,” Thompson said. Black bears aren’t known for being overly aggressive or destructive, according to Thompson. In most cases, the bear will make its way back home in just a few days.

“It seems like usually they disappear because they don’t find what they want (in Iowa) because they realize, ‘Oh there’s no bears down here,” Thompson said. Just in case, experts say it’s a good idea to be on the safe side and not get too close.

“Always give yourself some distance, don’t try to take a selfie, give yourself a few hundred yards,” Thompson said. Manship said he didn’t get closer than a half mile to the bear.