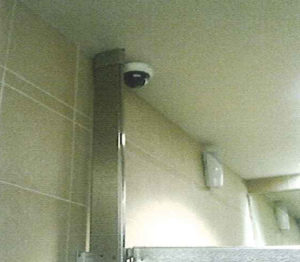 Camera view from a stall of the women’s restroom at the Iowa City Library.

Video monitoring in public restrooms and locker rooms is likely to be outlawed soon in Iowa.

The Iowa legislature has sent the governor a bill that forbids the practice in public libraries, public schools and other government buildings.

“I do believe that when you go behind the door in our restrooms, you have a certain degree of privacy,” Heartsill says.

The bill was drafted after a woman noticed security cameras in the Iowa City Public Library’s rest rooms. Representative Vicki Lensing of Iowa City says the cameras were installed in 2005 after an incident in a Des Moines Public Library restroom.

“A registered sex offender grabbed and kidnapped a 20-month-old toddler and sexually assaulted her in the men’s room after he had locked the door,” Lensing says. “This caused my public library board to read this news coverage about this tragic incident and deliberate over what protections they had in place.”

Lensing says the recordings are not viewed unless a crime occurs. The American Civil Liberties Union of Iowa pushed for the ban, since the video is being collected by a public board and people can petition to see the video. Heartsill says the cameras in Iowa City’s library aren’t being monitored in “real time” either.

“To suggest that this is deterring any type of violence or bullying or vandalism…possibly it is,” Heartsill says. “But if someone is going to be abused, the fact that a camera is there recording it is not going to stop that person from being abused.”

The bill does include an exception for hospitals. Some facilities use video monitoring to ensure the safety of patients. Some hospitals, for example, use video to monitor patients who are prone to seizures.

The Senate passed the bill 49-0 last week. It cleared the House on an 82-14 vote yesterday and is now headed to the governor’s desk.