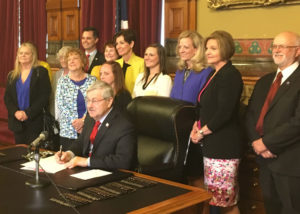 Governor Terry Branstad signs the bill as supporters look on.

Two crime victims stood behind Governor Branstad this morning as the governor signed a bill into law that they’d lobbied for.

The mother of a woman killed by an abusive husband and a woman stalked by a former dating partner praised lawmakers for passing the bill.

“I’m elated that this is becoming law. It’s going to help so many victims and survivors in the state of Iowa and we’re very happy about that,” said Tiffany Allison of Des Moines, who was stalked by a man she’d dated.

The new law makes it a crime to secretly attach a GPS device to someone’s car. The bill also allows judges

to order electronic monitoring of released domestic abusers. Sheila Lynch’s daughter was killed in Des Moines in 2009 by an abusive husband she was trying to leave and divorce.

“When me and my family found out about it we got her out for about a month and then he was stalking her in different rental cars, kidnapped her outside of a Target parking lot and murdered her afterwards, so it’s been my passion to get GPS monitoring on offenders and this is an awesome day,” Lynch said, smiling with tears in her eyes. “It’s a very awesome day.”

Lynch is raising her eight-year-old grandson at her home in Nevada. The boy was seven-and-a-half months old when his mother, TereseAnn Lynch, was murdered.

“This bill is going to save lives and we couldn’t help my daughter, but we’re going to help others down the road,” Lynch said, her voice cracking with emotion. “It’s amazing.”

Lynch glanced upward several times as Governor Branstad signed the bill into law — a signal she was thinking of her daughter, who was a sergeant in the Iowa Air National Guard.

“I think my daughter knows the progress that we’ve made,” Lynch told reporters. “I think that she knows because of her we’re doing better things for the state of Iowa and we lost her, but we’re going to save others in her name.”

Allison, the other advocate at the forefront of this lobbying effort, said the new law won’t affect her situation because she wasn’t married to the man stalking her. Allison and others plan to keep pestering the state’s politicians to make the penalties for stalking and abusing a dating partner as tough as the penalties for domestic partners who’re found guilty of those crimes.

“We are definitely not done,” Allison said. “We still have a lot of things we’d like to see happen in order to better protect victims in the state of Iowa.”

“I think that if you haven’t been personally affected by domestic violence, it’s hard to understand,” Allison said. “It’s very easy to say that we have these things in place for victims who are going through this process, but they really don’t know how that feels for a victim or survivor until they speak out.”

According to the National Coalition Against Domestic Violence, more than 12 million Americans experience “intimate partner violence” each year. And it’s not just a problem among adults. A recent report indicates one-and-a-half million teenagers in the U.S. have been abused by a date.