Jimmie Johnson gained control of the rain-delayed race at Bristol Monday with 21 of the race’s 500 laps to go and edged sometime Missourian Clint Bowyer by 1.2 seconds.  It’s his second straight win, the eleventh time he has racked up back-to-back victories. 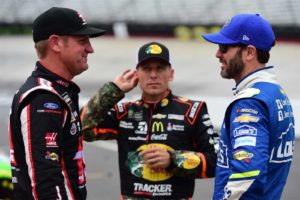 Bowyer’s comeback season continued with his fourth top ten finish of the year, his best overall finish since he ran second at Richmond in 2013.  Bowyer (talking to Joplin’s Jamie McMurray and to Johnson) said after the race that he was “starting to do some pretty desperate things” trying to catch Johnson.  But he said, “Then you must realize—your mindset quickly changes and you’re like, ‘alright, let’s put it in perspective here: we’ve come a long way. It was a long day and second place is probably a good run for us and we should be happy with that.”

“But dammit,” he added, “you’d think he’d get tired of winning all these races.”  Johnson, however, shows no sign of winner’s fatigue.  The victory was his 82nd, sixth-most in NASCAR cup series history.  He’s one behind Cale Yarborough and only two behind Darrell Waltrip and Bobby Allison.  The co-owner of his car, Jeff Gordon, is third on the list with 93.