You are here: Home / Education / The ‘Peace Rock’ dug up at Grinnell College after 103 years underground

A long missing piece of Grinnell College history was successfully found and dug up after it turned into a class project.

Anthropology professor John Whittaker says the quest for what’s know as the “Peace Rock” goes back to 1914 and an annual campus tradition called the “Class Scrap.”

“This was kind of a hazing thing that lots of colleges had. The freshmen and the sophomores actually fought and tried to tie each other up. And if the freshmen won they couldn’t be hazed,”Whittaker says. “The college hated it, students got injured property got damaged. A student was killed in Wisconsin at one of these things.”

The Grinnell College president at the time, John Main, gave a sermon about the evils of the Class Scrap and call for its abolition. “The two classes took it to heart in 1913 and they went away, the spectators assembled in the morning to see them fight and they came in united with this big rock that they had dug up in a farm two-and-a-half miles out of town,” Whittaker explains. “So they planted it in the center of campus as the tomb of the Class Scrap, Peace Rock.” 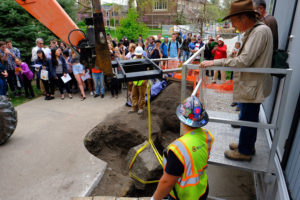 The Peace Rock is moved after being uncovered.

But the rock that was supposed to become a symbol of peace, turned into a target. “Other people apparently did not like losing this tradition because the next semester — 1914 in the spring — it was first painted red. And then attempt was made to blow it up with dynamite. And then somebody came out in the dead of night and dug a hole and toppled it in,” Whittaker says.

It stayed in the hole covered over and eventually forgotten. Whittaker says construction is underway on some new buildings and it seemed like the right time to have his Archaeological Field Methods class search for the Peace Rock. Local historian Byron Worley, who has taught a class about the Peace Rock at the Grinnell library, was able to give them an approximate location of the peace rock.

Whittaker and his students then got help from a friend of his who brought in a ground penetrating radar to zero in on the buried rock. He says they identified a large anomaly near a big patch of sidewalk and they dug down, but didn’t find anything. They dug a little deeper and found the rock. Students got to work digging the rock out of the ground. The 1,600 pound rock was pulled out Tuesday (March 25), 103 years after it was first buried in the hole.

Whittaker says it was a fun project. “Oh, it’s just great absolutely. I mean that’s what archeology likes to do, telling stories that don’t get told otherwise,” Whittaker says. “And in this one we have some historical information that makes it a good story. It’s fun to think about what college life was like in 1914, because it was very, very different from today,” he says. Whittaker says the school will decide where the rock ends up as the construction project gets completed.