You are here: Home / News / April was on the way to heat record, then temperatures dropped 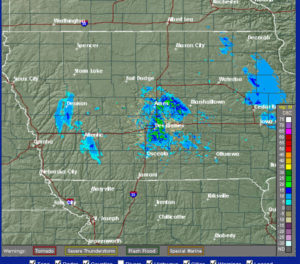 May weather is starting out bucking the norm in Iowa with unseasonably cold temperatures and light snow in parts of northern Iowa.

State climatologist Harry Hillaker says April was also a month of unusual extremes as the state saw temperatures range from as low as 20 degrees to well into the 80s. There were six days where temps reached into the 80s somewhere in the state.

“Temperatures over the first two-and-a-half weeks or so of the month averaged well above normal,” Hillaker says. “In fact, we were on a near-record warm pace there for a while, but certainly, the last week in particular has been much, much colder and the month as a whole ended up being about two-and-a-half degrees warmer than usual.”

Many Iowans may’ve used both their air conditioners and their furnaces during April, alternating their clothes as well from t-shirts and shorts to long pants, sweaters and heavy coats.

“The overall temperature extremes, the lowest temperature we had was 20 degrees at Battle Creek in Ida County on the morning of April 7th,” Hillaker says, “and on the high end, it was 84 degrees at Lamoni on the 19th.” Despite all of the rain lately, the first half of the month was relatively dry, which balanced out to Iowa getting about a quarter-inch more rain than usual during the month.

April is often a month with a lot of turbulent weather but Hillaker says there were fewer severe weather events than is typical. There were only three days during the month where severe weather was reported in the state, the 9th, the 15th and the 19th.

“The biggest one was the evening before Easter, back on the 15th, we had severe storms reported in 24 of Iowa’s 99 counties, mostly in the form of hail,” Hillaker says. “In some areas, we had as large as baseball-sized hail.” One tornado was reported during April, on the 19th near Carroll, but damage was minor. As for the month ahead, the long-range forecast for May calls for a somewhat drier-than-usual trend and temperatures near-normal.