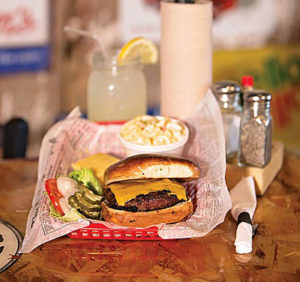 The Hereford Burger — an 8 ounce beef burger served on a toasted bun with cheese.

A relatively new restaurant in northwest Iowa has won the title of the state’s “Best Burger” for 2017.

The annual contest is run by the Iowa Beef Industry Council and the Iowa Cattlemen’s Association. Smokin’ Hereford BBQ in Storm Lake was announced as this year’s winner today.

Natalie Schumann is the front-of-house manager for the restaurant, which opened in October 2015.

“We were very excited for this. This is such a great opportunity for us. I mean…we just wanted to cry with joy,” Schumann said. Public voting for “Iowa’s Best Burger” began in February and more than 9,200 nominations were submitted. Judges visited the 10 burger joints that made the contest’s final round. Smokin’ Hereford BBQ came out on top, as the judges noted the unique flavor of their burger made from Iowa beef. 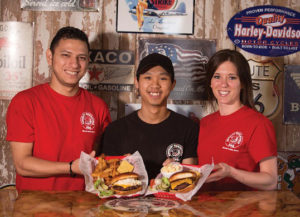 “That comes from Coon River Farms in Nemaha, Iowa. We have a partnership with them,” Schumann said. “So, it’s basically straight from the farm to our table.” The patties include steak – adding to the flavor.

“It’s like a ground chuck. It has the sirloin mixed-in with the ground beef, which gives it a great flavor,” Schumann said. Smokin’ Hereford BBQ is located in an old train depot. In addition to the food, the restaurant serves up a unique atmosphere.

“Our floor comes from an old (high school) gym floor in Fonda, Iowa and we have different tin and barn wood from local family barns,” Schumann said. This marks the eighth year for the “Best Burger” contest.

The Chuckwagon Restaurant in Adair took the title last year.