You are here: Home / Sports / Depth leads Luther to another IIAC crown 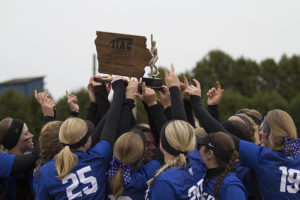 Luther softball coach Renae Hartl says depth is the biggest strength of this year’s team. The Norse are 37-3 overall and won a third straight Iowa Conference regular season title by posting a league mark of 15-1. It is Luther’s fifth title in seven years.

“This team never relies on one person to get it done”, said Hartl. “We just this week had our third pitcher recognized as Iowa Conference Pitcher of the Week. To have three quality pitchers going into the post season and to have so many offensive weapons one through nine has really been the difference with this team.”

Eight players are batting better than .300 for a team that is averaging more than seven and a half runs per game.

“It seems like we are able to turn our lineup over quite a bit during a game.”

Luther is the top seed and will host the Iowa Conference tournament beginning Friday.